I’m right about everything

I know how this is going to end 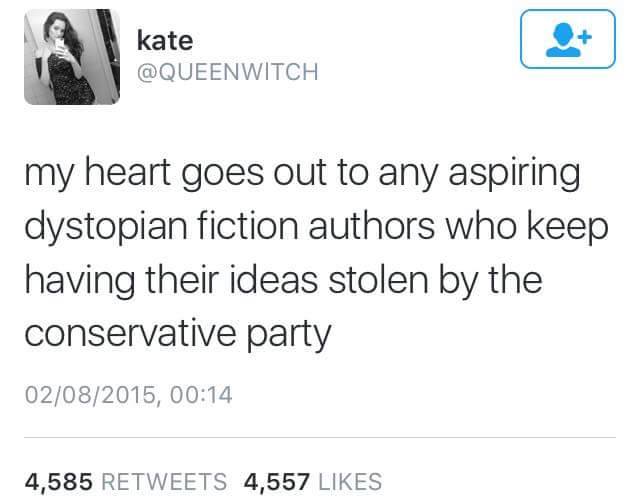 Twelve years ago I began work on a speculative body of work about the dynamics of capitalism, extended beyond limiting technological factors to their logical conclusion. Here I will list links to articles and developments that confirm my estimations, not for ego (there is that) but to keep as much as possible of it in one place.

I’ll start with this.

There is significant similarity between my vision of a ‘game-ified’ heirarchical social structure and that of the social ‘insurance rating’ system being introduced in China, which several people who know me have brought to my attention.

What this is a database of citizens that has evolved organically, through the streamlining of data between insurance companies and state records, which takes many many factors of a person’s existence (salary, health, recreational activities, involvement in political protests, involvement of friends in political protests, etc etc) and generates an overarching insurance Rating, or score. These scores are publicly known, and citizens are encouraged to display their scores on social media, including online dating websites. At a stroke, this system incentivises adherence to those behaviors deemed stable, and massively disincentivises activism, critique of the government, and whatever else is considered undesirable.

The social element is what is most powerful about this mechanism, as it applies subtle, societal pressure across all aspects of human life. It may become impossible, like life without money, to exist in China independently of these ratings (also without incurring formal sanctions, it has been suggested). From this point on, as citizens lean in, the economy of Score may swell to become exponentially central to the lives of Chinese people. A value system so capable of affecting so many aspects of a person’s life is inherently erosive, if not usurpatory, of any other kind of non-state-centralised morality.

The main difference between my envisioning of society this mechanism is coupled with an advanced form of direct-democracy, wherein the law, and what is deemed desirable behavior, is updated continuously according to popular opinion (popular, ultimately, meaning popular among those with the highest of scores). In China, the system simply reinforces a traditional power structure.

This article is about high-speed stock-trading: the way powerful computers follow the stock market, firing their owners’ capital into one company one minute, another the next, all to take advantage of minor fluctuations in share value and create enormous amounts of wealth in the process.

Couple this with an international governmental negligence to tax/comprehend global finance capital, and the conviction that ‘the market knows best’ (see EU handling of Greek anti-austerity politics) and you have a situation wherein hugely powerful international money-technology machinery amplifies success or failure a thousandfold, the rich become exponentially richer while capital flies in and out of countries on a whim, always threatening to turn the country into a third-world hellhole at the drop of a hat.

This article says an awful lot of other stuff too, that I won’t go into. But the key point is that what was yesterday considered ‘likely’ in terms of financial behavior, and today is considered ‘natural’, will tomorrow be literally automatic, as computers are programmed in the image of predatory man’s survival instinct. This is a point from which there can be no return other than an escape from money altogether. The machine only requires profit, has not been programmed to comprehend human survival or quality of life. We could have programmed it differently, but we didn’t. It isn’t too late, but the struggle is an uphill one now and as processors get faster it is going to get worse.

There is much written (probably) about the fetishisation of military hardware, the porous boundary between military propaganda and entertainment (see also Michael Bay’s access to hardware and personnel in return for his eternally enthusiastic support for the American military) . I describe a world in which pop stars and police are the same people, branded vehicles of consumable identity, policing crime effortlessly, cinematically, in a surveillance society in which everyone participates in the sport of hunt-the-undesirable.

What do clickfarming, search engine optimisation and bitcoin mining have in common?

They are all forms of ‘productivity’ in which advantage is strictly relative; in which infinite labour/effort/processing can produce strictly finite benefit.

The advantage a business experiences through good search engine optimisation is relative. Customers find the site before they find its competitors, thus it gets more business. However, with every business applying similar methods, potentially infinite work-hours can be invested on all sides with an outcome that is strictly zero-sum (a winner, a loser, no increase in market share).

Clickfarming follows a similar logic, based on the internal economy of ‘likes’, ‘shares’ and ‘follows’ within social media. For every new (successful) platform, an internal economy is created, creating the need for effort to foreground a company’s Page. No actual value is created, only relative prominence, and yet many thousands of work-hours are bought and sold: lives are invested in practices which are both meaningless and literally self-defeating.

If slavery is a moral abhoration because it consumes lives, surely there is something to be said about these ‘energy sinks’ which economic pressures alone demand. “Let no man spend his life in effort which another man’s effort will undo” is the kind of thing I’m getting at.

Finally, and perhaps most visibly, systematically fucked (and most informative in terms of the way in which resource-realities meet economic abstractions), is the mechanism by which Bitcoins are unlocked, and the way in which the bitcoin ‘gold rush’ became, essentially, a race to buy farms of expensive, energy-intensive computers and set them to work searching for extremely large ‘special’ (read: prime) numbers – a task that is pointless but for that each new integer that meets Bitcoin’s requirements unlocks a new coin. The mechanism in itself is ingenious, and theoretically harmless, except that with the scale of adoption that was seen, Bitcoin became essentially a machine that converts electricity into money. Yes, you heard that right. Finite electricity from finite carbon-based resources, into money which is devalued by inflation and is valuable only in relation to the ammount of money in circulation. Did I mention that bitcoins are released at the same speed regardless how many people are digging for them? So that an increase in processing power only increases your likelihood of striking coin relative to the other people doing the same.

This alone wouldn’t be such a problem. But the special-number formula is set to produce diminishing yields over time, until a point in time (2160) when all coins have been mined and the economy is sealed. As bitcoin special-numbers become progressively scarcer, an exponential ratio of processing power is required for every coin that is mined. Again, if people could respond to this rationally, as in “oh, we’re basically done here”, there’d be no problem. But as it is, hungry profit motives produce distorted thinking, and it becomes an economic imperative to continue to pump industrial-scale electricity into the production of diminishing relative value until the profit margin disappears entirely. It is to the credit of the designers of Bitcoin that there be this finality pre-wired in the system; without it there’d be nothing to stop an infinite sinking of power and resources into pursuit of value, almost like in the rest of life… shit.

I describe a world in which infinite effort within a finite system is the norm. All labour is directed inwardly, in competition, and amounts only to relative positioning within a heirarchy. The heirarchy; the leaderboard, can allow some to rise and others to fall, but the structure of society cannot change. Nothing more can be produced or achieved, no rise in living standard can be expected, psychology cannot improve.

Spikes that come out of the ground

An opinion piece – public outcry at this inhumane response to rough sleeping was thankfully rapid and pronounced. But the logic behind the design and implementation of Spikes in the ground to stop homeless people sleeping rough has not been altered. Beyond a certain point, it becomes less about what the good people want and more about what the bad people don’t. There are political points to be won with cruelty against those without social capital (or those of ‘negative value’) – other comparable examples include the senseless destruction of working water supplies in otherwise derelict buildings (to stop squatters from living there), the criminalisation of handouts in several boroughs in London (it “encourages” homelessness).